A New Press Release About A Story Tourist In Britain

Announcing Fort Canoga Press’s newest publication -- A Story Tourist in Britain; With Glimpses of Harry Potter, Beatrix Potter, Jane Austen and Many Others. written by Janet Crane Barley. Her first book, Winter in July: Visits With Children’s Authors Down Under, was published by Scarecrow Press.
A Story Tourist in Britain contains six journals from Story Tours organized by and led by Dr. Mary Lou White, professor of international children’s literature and head of Book Adventures Travel.
The author, a professional writer, strives to tell interesting, insightful stories about her travels. Bill Bryson is her role model.
Copies of A Story Tourist in Britain are available from amazon.com for less than the cover price of $15. (Price varies slightly from day to day.) Amazon offers a peek inside to give readers a taste of the book’s style.
A Story Tourist in Britain describes people and places from the following tours:

My first book talk of the summer will be this Wednesday, June 17th, at the North County Library in Huntersville. I will be talking about There Was A Time, as well as my North Carolina Musicians book. All of our Fort Canoga Press books will be available at the talk.

I'll also be on WNCW next Wednesday, June 24th, at noon. I'll be spinning records with Joe Kendrick, and talking about North (and South) Carolina Garage Rock. Tune in!

Look for further press about the show, and look for the Mod VI this Friday night at 8:45pm, as they'll appear on WBTV's news show on their Bounce channel, talking about our June 27th show. 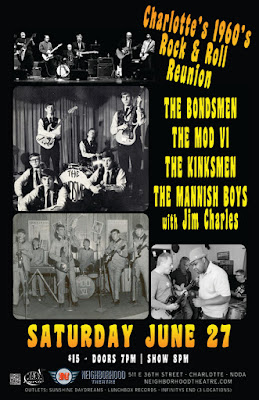 Posted by Daniel Coston at 10:12 AM No comments:

Daniel Coston
I have been a traveler, a documentarian, an enjoyer of life, a survivor, a lead character, a supporting role, a storyteller, an excitable boy, a quiet soul, and an occasional thinker. All when the world asked me to, or all at the same time.